The shift comes as Australia’s wine sales to China have plunged in the wake of an ongoing rift between them.

When it comes to drinking Australian wine, Britons are starting to opt for higher priced options. That’s important, as sales to China plunge in the wake of Beijing’s trade reprisals.

Once seen as a prime market for cheaper product, the U.K. has now surpassed China to become the top destination for higher-end Australian wine, according a report from Wine Australia. The value of exports to the country climbed 7% to A$460 million ($341 million) in the year ended Sept. 30, even as shipments by volume declined 2%.

Still, the overall value of Australian wine exports slumped 24% to A$2.3 billion as the industry continues to face a barrage of headwinds, including global shipping delays. 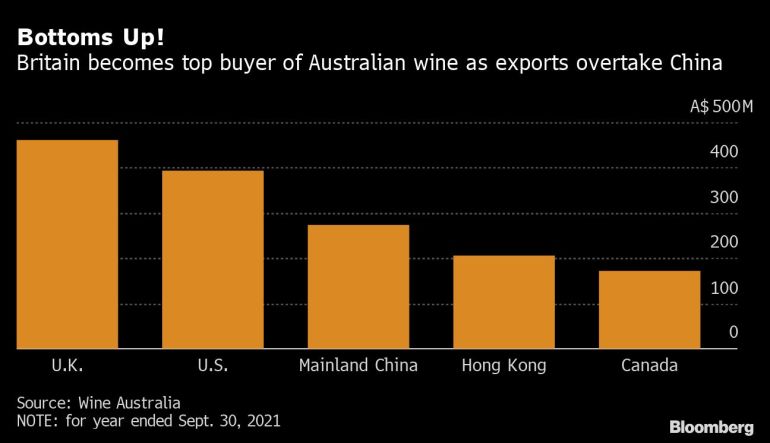 The loss of the huge China market in the wake of Beijing’s prohibitive duties continued to weigh on the outlook, as exports to the mainland plummeted 77% to A$274 million. The industry is still reeling following tariffs of more than 200% placed on Australian wine late last year after relations between the nations nosedived.

That move dealt a huge blow to the sector, wiping out demand from what had been the industry’s most valuable customer. It left many questioning the future of premium brands, including Treasury Wine Estates Ltd., which previously counted on China for about approximately 30% of its total earnings.

The report shows those tariffs are having a massive impact, with the number of exporters shipping product to mainland China plunging in the period to 750 from 2,241 in the 12 months before.

Despite the tariffs imposed in China’s mainland, bumper shipments continued to make their way through to buyers in Hong Kong, where the value of wine exports surged 135% to hit A$207 million, according to the report.

Wine Australia says its exporters are now looking more to the U.K. to bolster sales, with the coronavirus pandemic and market upheaval amid the Brexit transition also helping to boost demand for Australian product, the report said.

“Over the past 18 months, there has been a significant increase in exports to the U.K., which has led to the market solidifying its place as Australia’s number one destination by volume,” Wine Australia’s general manager of corporate affairs and regulation, Rachel Triggs, said.

Baby, It’s Cold Outside: 26 Chic and Cozy Accessories to Gift Every Homebody

Japan to bar all foreign visitors over Omicron variant

US tightens curbs as Cambodia moves closer into China’s embrace