ASBURY PARK, N.J. – Under former President Donald Trump, transgender people couldn’t serve their country, even if they wanted to. The administration had banned them from the military.

President Joe Biden reversed that on Monday, five days after he took the oath of office.

The reversal follows Biden’s day one actions that included executive orders reversing Trump’s race and gender diversity training ban and prohibiting workplace discrimination in the federal government based on sexual orientation and gender identity, as well as directing federal agencies to ensure LGBTQ protections are included in anti-discrimination statutes.

These actions are a strong indication of how the rights of the LGBTQ community will immediately change during the Biden administration, and advocates are optimistic about rights becoming permanent under federal law.

“(The Trump administration) will go down in history as one of the most blatantly hostile administrations to LGBTQ equality,” said Sharon McGowan, chief strategy officer and legal director of Lambda Legal, a national nonprofit organization working for the civil rights of the LGBT community and those living with HIV. “And again, you have to put that in context, because obviously going back not that long ago one might look to the indifference and hostility of the Reagan administration during the first days of the AIDS crisis as sort of another example.”

Biden and Vice President Kamala Harris have their work cut out for them as they endeavor to restore and shore up rights and protections for lesbian, gay, bisexual, transgender and queer Americans in the wake of Trump’s time in office, advocates and experts said.

“It certainly is a significant task that they have ahead, in part because the Trump administration literally up through sort of the last hours of the administration have tried to leave no stone unturned in terms of the amount of damage and harm that they can do to the LGBT community,” said McGowan.

As early as February 2017, the Trump administration rolled back Obama-era protections for transgender students that had allowed them to use school restrooms corresponding to their gender identity.

That was followed by Trump’s announcement of the transgender troop ban in July 2017, with the policy taking effect in April 2019.

Human Rights Campaign president Alphonso David, in a statement Monday, described Trump’s ban as “an arbitrary and discriminatory executive action that has not only harmed transgender service members but our entire military.”

“The greatest military in the world will again value readiness over bias, and qualifications over discrimination,” David said.

“By prioritizing an end to this discriminatory, unjustified ban, President Biden has fulfilled a campaign promise and is making our military stronger and more unified,” said GLAAD president and CEO Sarah Kate Ellis in a statement Monday.

Now transgender people can see themselves reflected in the people serving their country, and young people will look to Biden’s administration and see several LGBTQ people holding prominent positions.

Among them Pennsylvania Department of Health secretary Dr. Rachel Levine, Biden’s pick for assistant secretary of health, would be the first openly transgender federal official confirmed by the U.S. Senate.

“Having LGBTQ representation in the federal government, including multiracial people, a question like, ‘Could I be in government as a trans or gay person?’ stops being a question,” said Ethan Levine, a GLSEN South Jersey volunteer and assistant professor at Stockton University. “Broader LGBTQ policies that aren’t directly aimed at kids still impact them … that becomes part of the world you’re being raised into.”

GLAAD, via its Trump Accountability Project, reported 181 actions or statements on the LGBTQ communityfrom the Trump administration over the last four years.

“In some ways it’s different (from the Regan administration) because there had been progress made,” said McGowan. “And the amount of intentional reversal and undermining of progress that had been made by this administration is what will likely set it apart from anything that came before it.”

Waiting for the Equality Act

With Biden in the White House and Democratic control over both houses of Congress, advocates are hopeful about the potential passage of the long-awaited Equality Act.

The Equality Act “will help address a lot of the discriminatory practices that the Trump and Pence administration (put into place),” said Christian Fuscarino, executive director of the education and advocacy organization Garden Stage Equality based in Asbury Park, New Jersey.

Passed by the House of Representatives in May 2019 before stalling in the Senate, the act would update federal nondiscrimination laws to make discrimination based on sexual orientation or gender identity unlawful.

“It would affect LGBTQ people in almost every area of life,” Warbelow said. “It certainly would codify the Bostock decision (by the United States Supreme Court in June), making it clear that you cannot be discriminated in employment. But it also applies it to housing, education, to jury service, access to credit.

“And then, where there are no sex non-discrimination laws, such as in most federally funded programs or places of public of accommodation, places you would expect to be able to go and get goods and services without discrimination, it adds sex, sexual orientation and gender identity (protections).

A study conducted by SAGE – a national organization that advocates for LGBTQ seniors – and the Equal Rights Center found that 48% of older same-sex couples applying for senior housing experienced some form of discrimination.

“When I talk to LGBT older adults and they discuss [how] it’s expensive to live in New Jersey and they need to move. I’ll say to them look carefully at the rights you have in each state because you won’t have the protections you have here in many other states, especially in regard to housing,” Sauer said. “That’s something I really hope would change if we have a national bill.”

Another change for discrimination policies involves adoption, which was protected before Trump rolled back LGBTQ anti-discrimination regulations. Levine hopes the Biden-Harris administration “affirms that queer families are valid and as qualified to adopt children as heterosexual families.”

On Monday, Biden established a policy that prohibits discrimination based on gender identity the military – another action, along with his day one executive orders, called for in the Human Rights Campaign’s Blueprint for Positive Change 2020.

Members of the LGBTQ community and their allies who feel beaten down, disheartened and at the end of their ropes after the last four years should feel confident in the Biden administration, Fuscarino said.

“The folks that are going into positions of leadership are speaking with leaders of LGBTQ nonprofit organizations that are on the cutting edge of what LGBTQ equality looks like in 2021,” Fuscarino said. “There are bright days ahead.”

Levine echoed “hopeful” is one word for their feelings toward the next four years. As an educator, he “can’t really imagine what it would be like to be a sixth grader seeing Pete Buttigieg [in a federal] role.”

Buttigieg, the former mayor of South Bend, Indiana and the president’s one-time Democratic presidential nomination rival, would be the first openly gay cabinet secretary if he is confirmed as Biden’s transportation secretary by the Senate.

The American public increasingly appears to favor equality, with a mid-September swing-state poll by Hart Research Associates and the HRC of 4,000 likely voters living in Arizona, Florida, Michigan, Pennsylvania, Wisconsin, Georgia, Iowa, North Carolina, Ohio and Texas finding overwhelming support for marriage equality, adoption rights and transgender military service, according to a report from The 19th and USA TODAY.

The HRC reported that at least 44 transgender or gender non-conforming people, the majority of whom were Black or Latinx transgender women, were killed in 2020, the highest that number has ever been since the HRC began tracking this data in 2013.

While some of Trump’s work can be countered by executive orders from Biden, other efforts will have long-lasting ramifications – such as how Trump and Senate Republicans, in McGowan’s words, “packed the federal judiciary” with people who had “backgrounds and histories and records demonstrating their hostility to LGBTQ people.”

According to Lambda, nearly 40% of the judges appointed by Trump to federal appeals courts have a history of anti-LGBTQ animus.

“And these, of course, are lifetime appointees,” said McGowan. “So even though the harm of the Trump administration over these past four years has been significant, much of it can be reversed even if the damage can’t be completely undone. But what has happened to the federal judiciary is obviously going to be something that has a legacy far beyond Jan. 20, 2021.”

Still, Christine Martucci, a 10-year U.S. Army veteran who served during the era of “Don’t Ask, Don’t Tell,” is optimistic about the country’s future.

“I’m very hopeful,” said Martucci, a singer/songwriter who lives in Little Egg Harbor, New Jersey with her wife. “I think as a country we’re all going to come together and heal, and I’m very hopeful about the Biden administration and I’m hopeful for the LGBTQ community that things are still going to be moving forward in a positive direction.”

Investigations: A 2009 warning about right-wing extremism was engulfed by politics. There are signs it’s happening again.

Hyundai rolls out adorable customer service robot for its showrooms 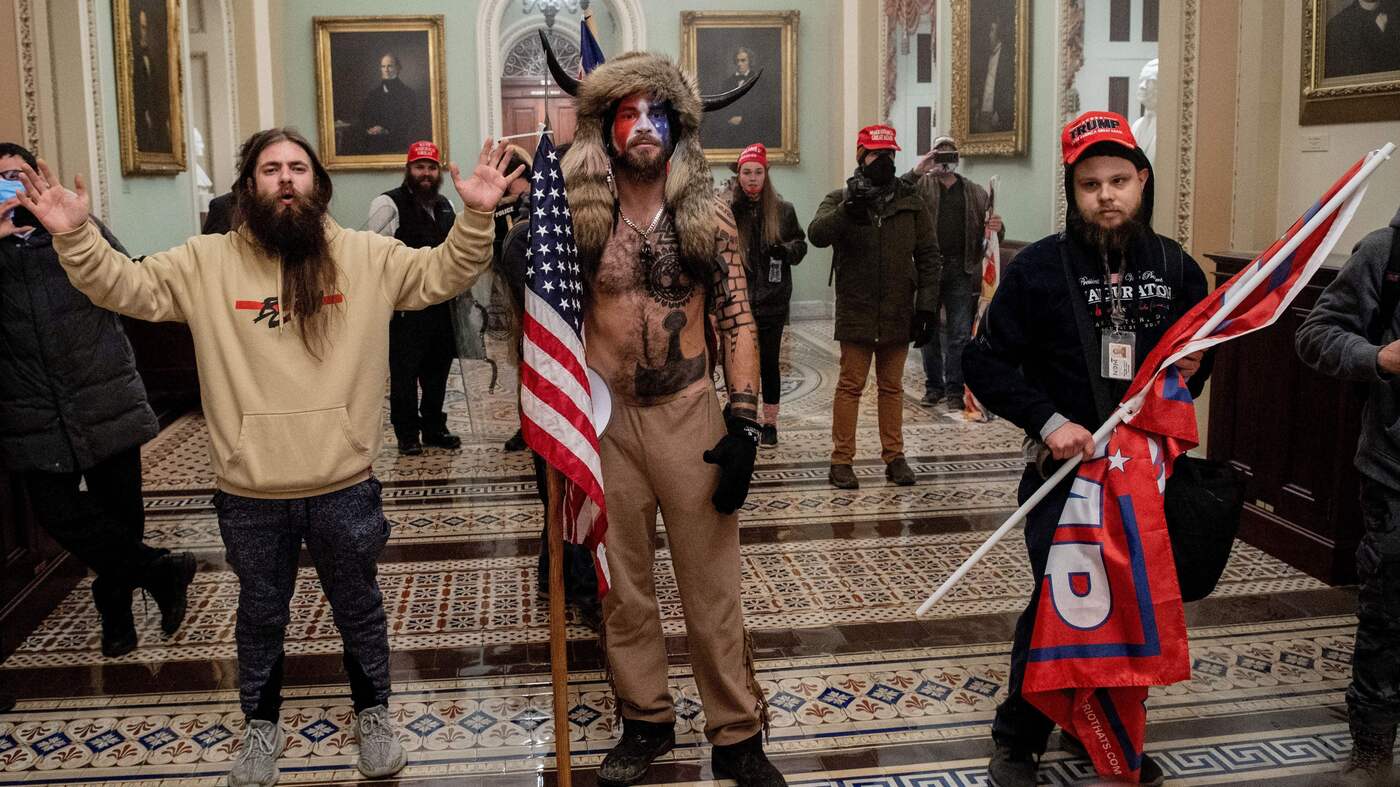 February is already the deadliest avalanche month in more than a decade. Here’s what’s fueling it.