With the win, Usman improved to 20-1-0, and has won 19 fights in a row, including five title defences.

“I am the pound-for-pound best alive right now,” he said.

Going into the fight, Covington said he had recalibrated his approach and would not fight the same way as he did in their first encounter. And the beginning of the opening round revealed a more cautious fighter, though as the round progressed, Usman’s pressure appeared to force Covington into a defensive posture. Usman got the first knockdown of the fight late in the second round, and attempted to finish Covington with a flurry of punches before the bell rang. He started the third round where he left off, but Covington finished the five minutes by having Usman pinned against the cage.

The two spent much of the fourth and fifth rounds exchanging strikes. Covington staggered Usman with a shot in the fifth, but was unable to put him away. 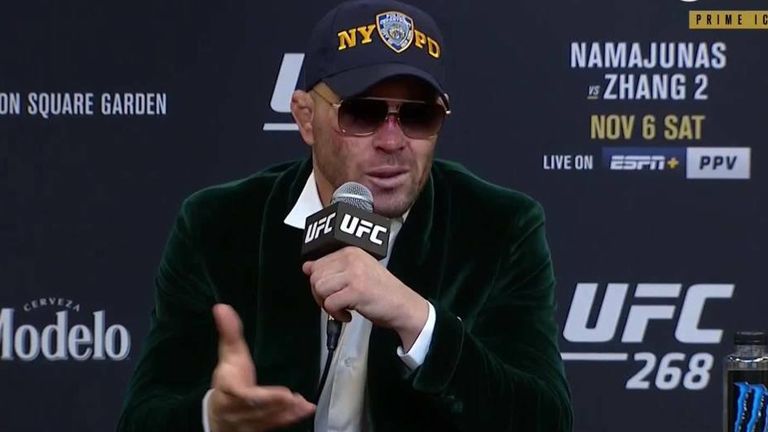 Despite losing the rematch at UFC 268, Covington says that he has ‘unfinished business’ with Usman

Usman and Covington headlined the fifth UFC pay-per-view event at Madison Square Garden, and had a pair of rematches in the co-main event and main event.

The Usman-Covington fight was a rematch of their classic title bout at UFC 245. Usman won that five-round, stand-up battle with a technical knockout of Covington with 50 seconds left in the fifth round, although Covington immediately protested referee Marc Goddard’s decision, and continued to grouse about the call in the 22 months since the fight.

There was no such controversy in the first Rose Namajunas-Zhang Weili women’s strawweight title fight, as Namajunas knocked out Weili 1:18 into the first round in their UFC 261 bout in April to retain her title.

Seven months later, the result was the same for Namajunas, even if the path she and Weili trod was unfamiliar. Following a five-round jiujitsu exhibition, Namajunas defeated Weili via split decision in the co-main event.

“It was different,” said Namajunas, who was serenaded by chants of “USA” and “Let’s Go Rose” by the partisan crowd throughout the fight. “I was pretty confident in the end I won it.”

Justin Gathje opened the five-fight main card with a three-round unanimous decision over Michael Chandler. Promoted as “The People’s Main Event,” and viewed as contender for Fight of the Night honours, Gathje and Chandler may have authored MMA’s Fight of the Year and one of the great fights in UFC history.

The two lightweights had an all-action fight. Gathje got the first knockdown, as he dropped Chandler nearly two minutes into the second round, and then spent the next minute trying to submit his rival. But Chandler manoeuvred his way out.

Chandler returned the favour in the third round as he suplexed Gathje, who was able to get back to his feet. The two traded strikes for the remainder.

“We should have been fighting in the (expletive Roman) Coliseum,” said Gathje, who lobbied for a title fight against the winner of the Charles Oliveira-Dustin Poirier championship bout at UFC 269 on Dec. 11. “I’m No. 2 (in the division).” The Ashes: ECB announces England vs Australia series to go ahead subject to several conditions being met